Today is a huge milestone for this project. I started last summer thinking I could get this rig roadworthy in 3-4 months. I was very wrong. I had already repaired some of the major things on the jeep such as seats, converted to 12V electronics, rewired the front end and changed it over to solid state ignition. She would go forward when I hit the gas, but didn't seem to have much for brakes. I assumed the 4 wheel drums were just weak, but we will see more of that later. The biggest problem in this jeep was that it would NOT go into second gear. This made tooling around the neighborhood and scaring the kids on the local improvised BMX track problematic. First gear would wind out and jumping to third was too much and it would bog down horribly to the point of being useless. I needed that second gear.

I parked it in the driveway and the trans and transfer case was dropped with the cross-member in June '13 and sent to an "awesome transmission guy" to rebuild. 9 months later after endless calls and prompts to get it done, he gave up and literally dropped the pile of parts in my driveway. Apparently this rig had a rare T84 transmission he was not familiar with. There was no way of knowing if all the stupid little parts was there or not. In my search for rebuild kits I found Novak in Logan, Utah. (about 3 hours away). I called them and they really seemed on top of their game. I explained the situation and they said they could fix it. I visited their shop and believe me they have their stuff together. If they cant find parts, they make them.

I dropped the whole pile off for the repair. 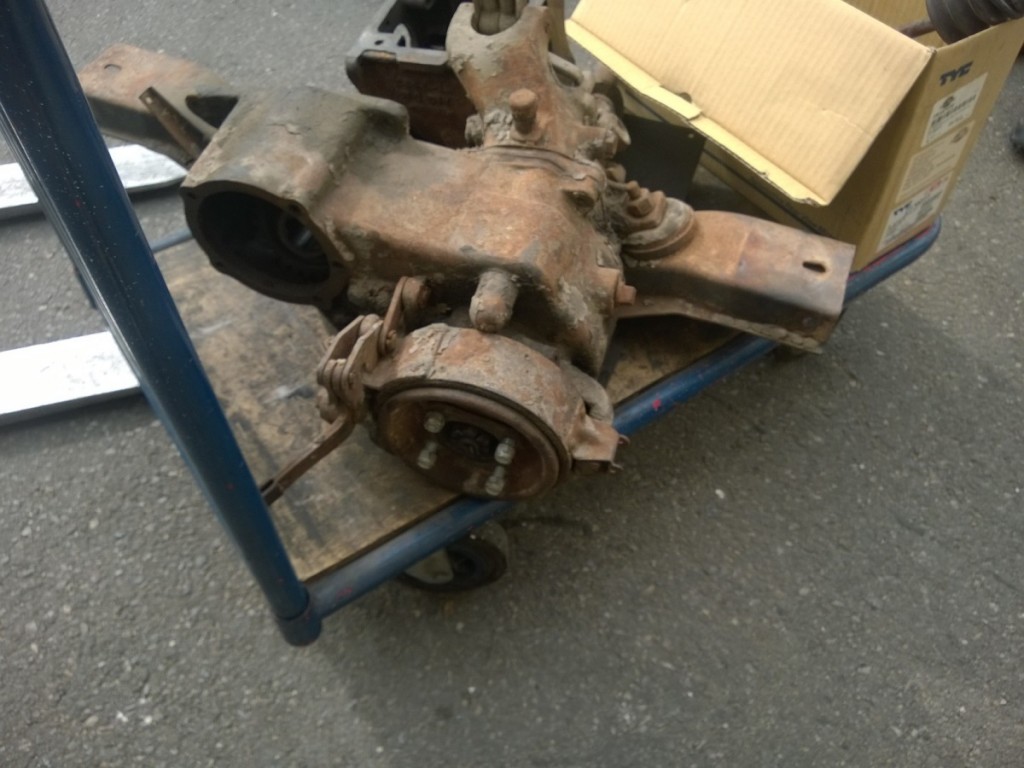 During this 9 month wait I came across a guy selling a really decent '48 tub, so I brought it home. It just needed the cowl area repaired and the frame pieces were in far better condition than mine. 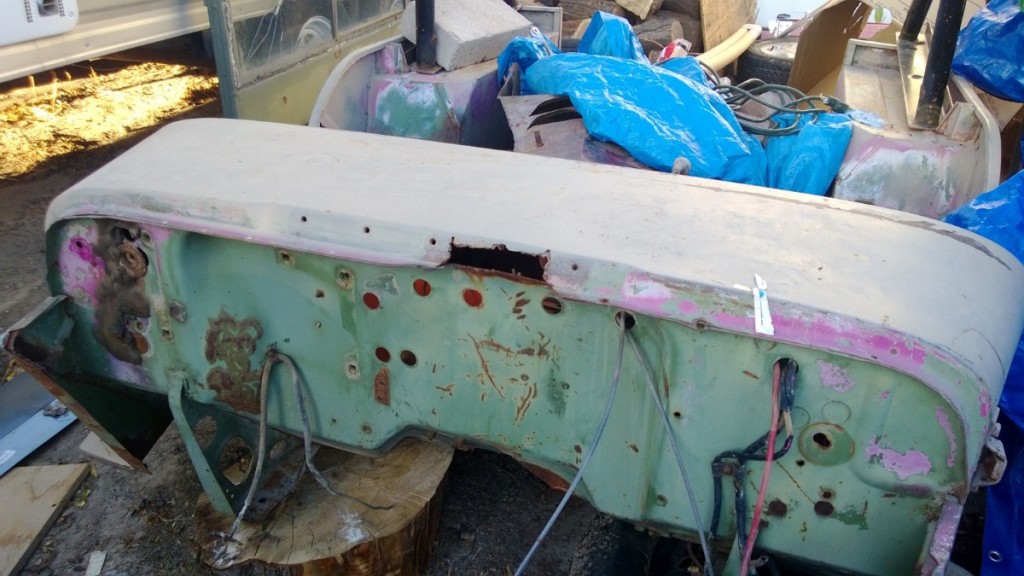 There were lots of extra holes in the dash and firewall, but otherwise really solid. The next part I came across in my local classifieds was a guy selling a NOS floor, still on the packing frame from Willys, from the 80s. The guy never got around to using it and we settled on $120 and a couple bulk boxes of .22 ammo for the deal. It still had the original packing slip taped to it! It had a patina of thin surface rust from being bare metal exposed to the air but otherwise was rock solid. 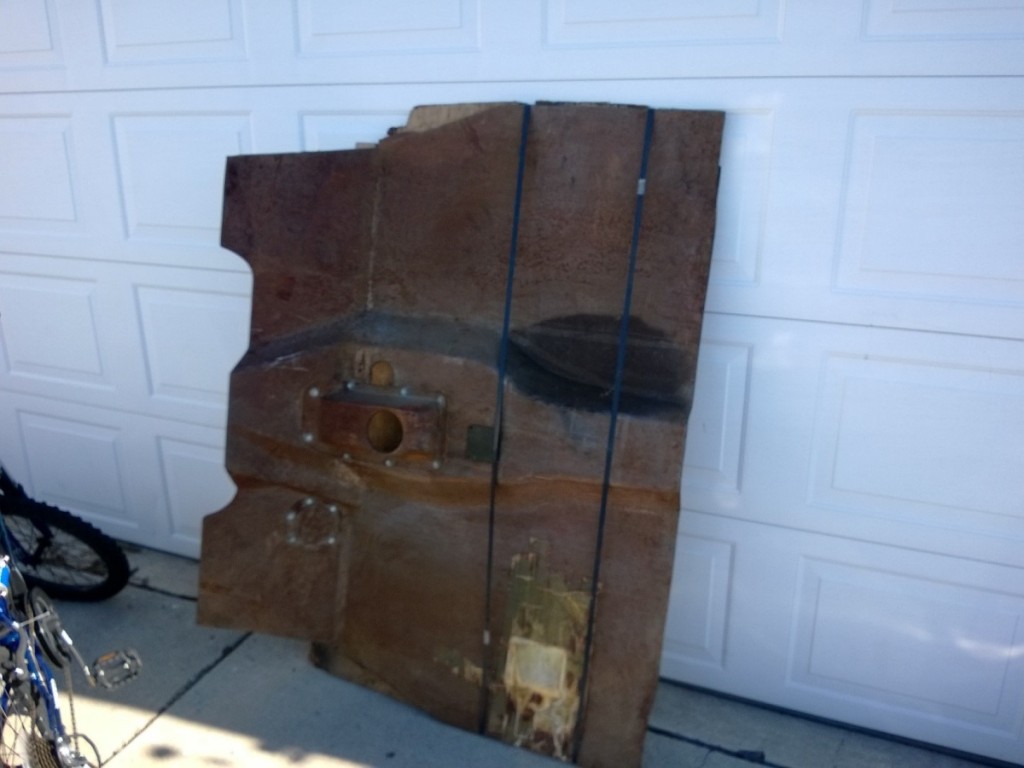 So with the trans and TX case out, and enough tub stuff to build a nice tub, I took the dive. I wasn't going for a museum-quality restoration, I just wanted everything to work and be dependable. I have resigned myself to being told I did it all wrong and saying "I know...." to every jeep-purist I come across anytime they get a look at it.

I ordered new tub frame pieces and lots of other assorted stuff from kaiserwillys.com to get started. In addition, constant Q&A via the forum at thecj2page.com and the CJ2 facebook group made finding answers to questions a lot easier.

My boys and I took to getting that tub off and broke half the nuts and bolts in the process. We should have soaked the whole rig in PB blaster for a couple weeks. The steering wheel was last to come off before pulling the tub, but we could not figure out how to get it off. 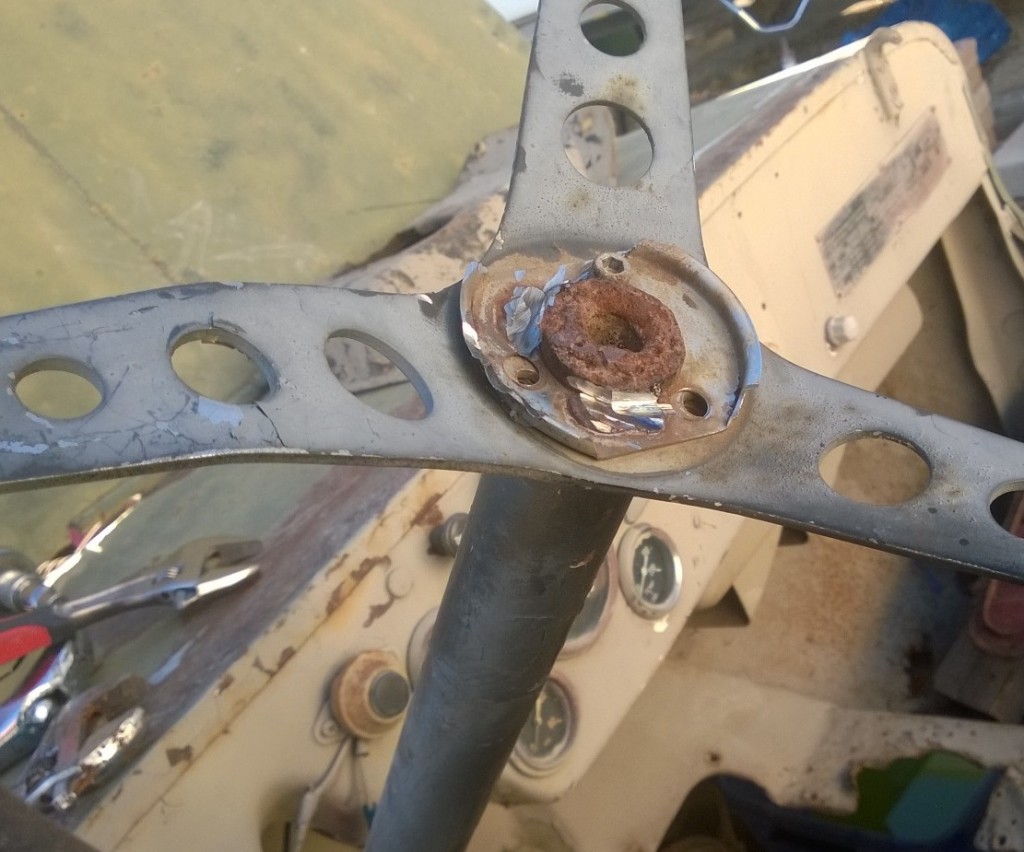 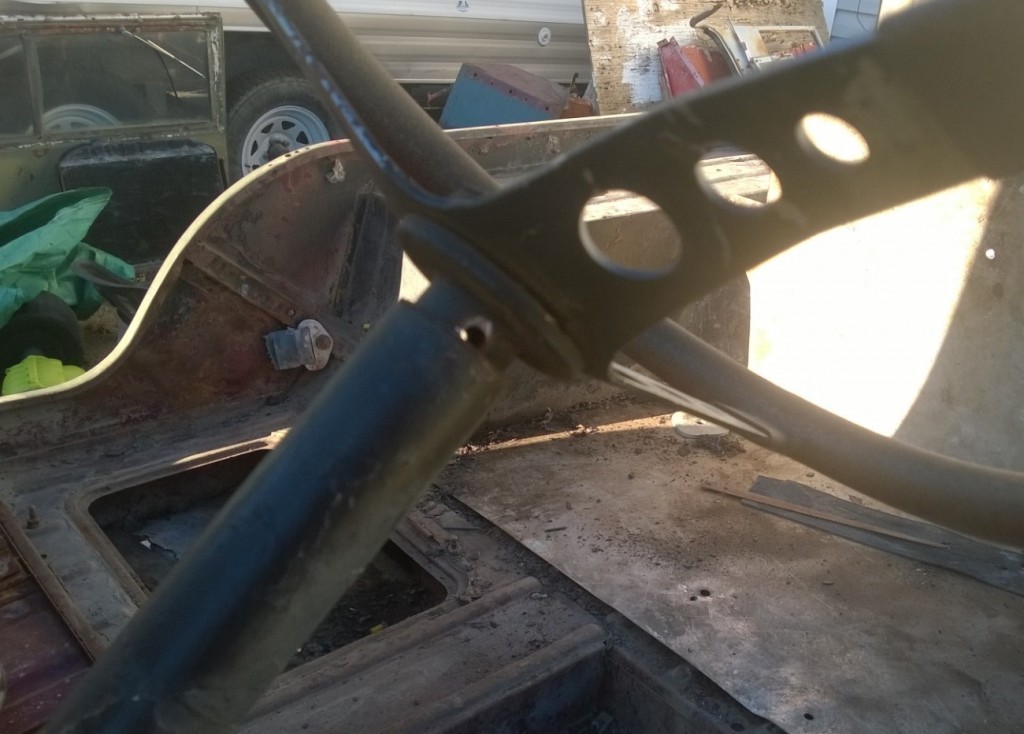 It turns out Bubba had welded the wheel to the shaft with some sort of improvised yoke. I had to grind the weld on the end of the assembly to get the wheel off, then I was left with a shortened center spline. I had to buy a used one from a fellow local jeeper to replace it. I also bought a new steering wheel and all the guts to make the horn work again. 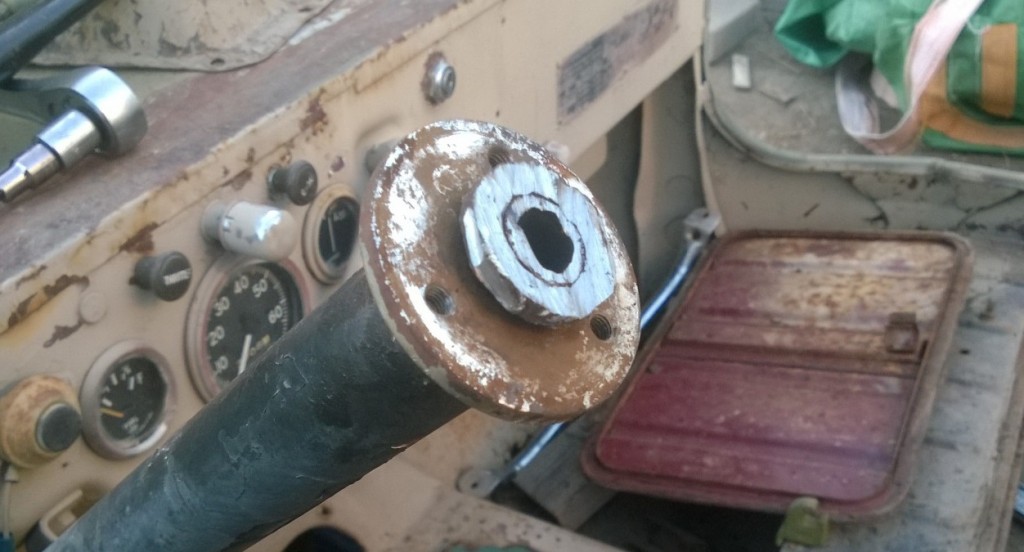 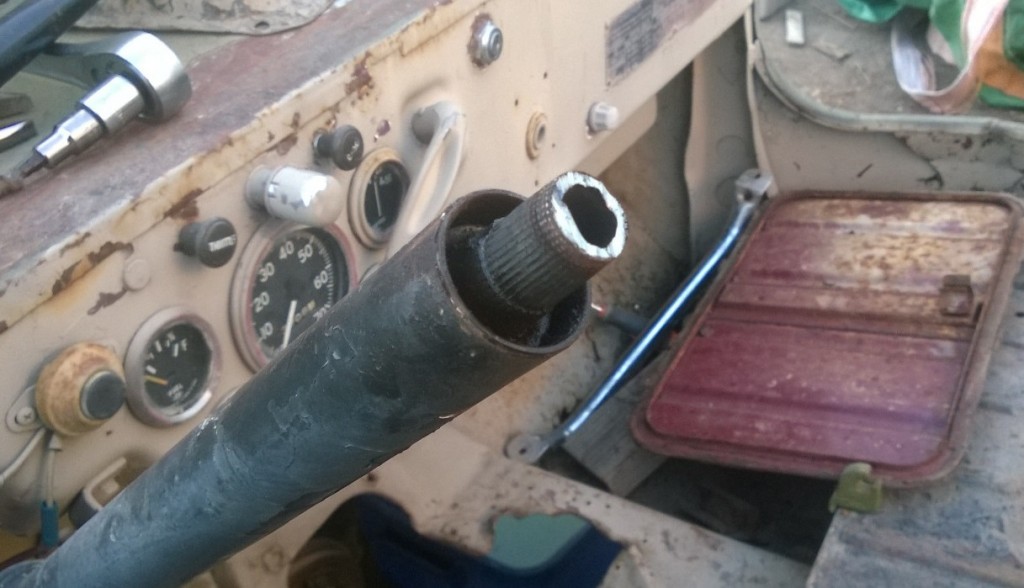 Now don't get me wrong. I'm not maligning Bubba. I'm glad Bubba had the wherewithal to make it functional rather than send the jeep to the boneyard. It hasn't always been as easy as click-click-click on a web page to get replacement parts or information.

When we were done breaking bolts and unhooking things, we finally got the tub off the frame! 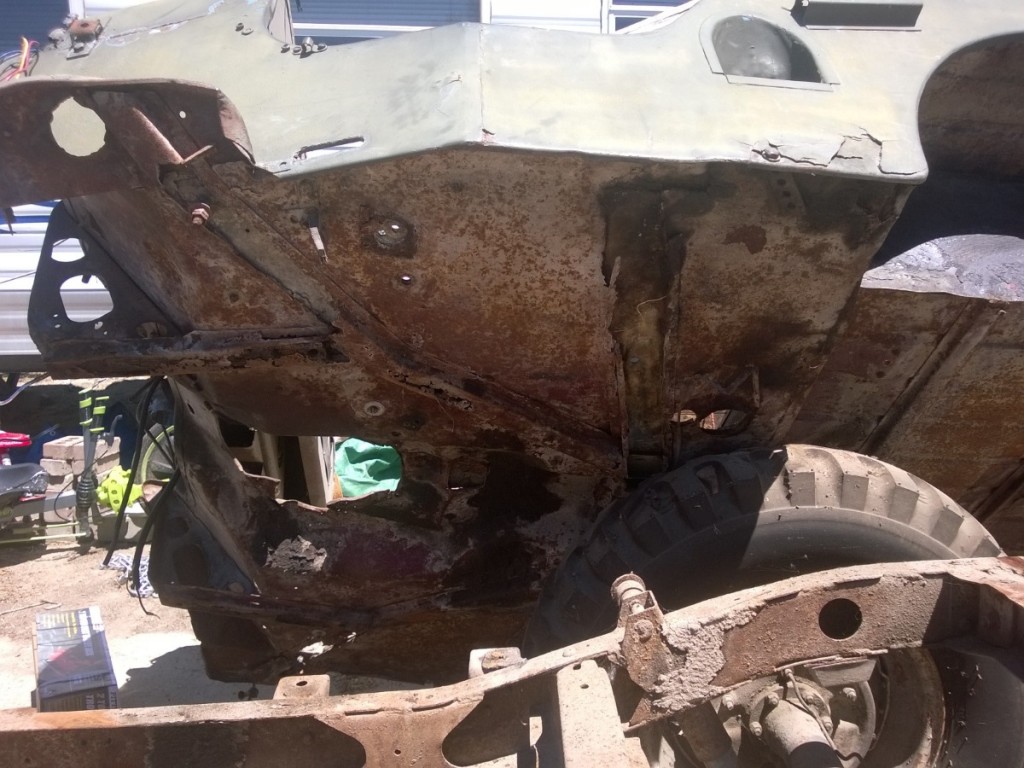 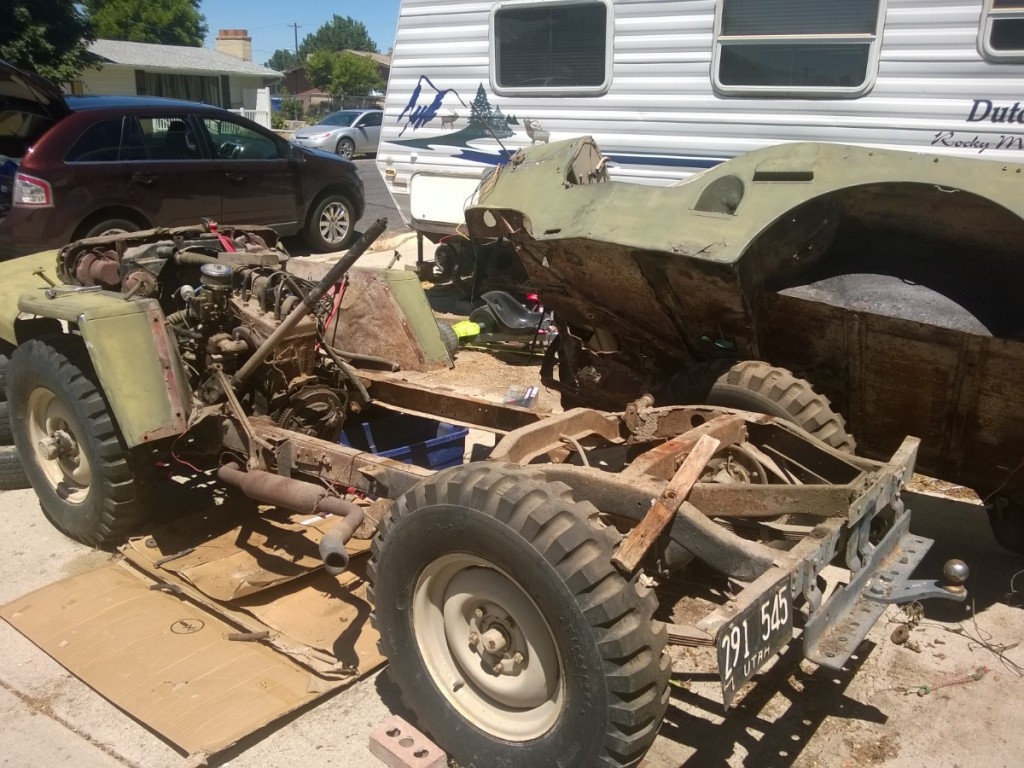 We found some other issue during the removal too:
Yep, the brake master cylinder was not attached to ANYTHING! 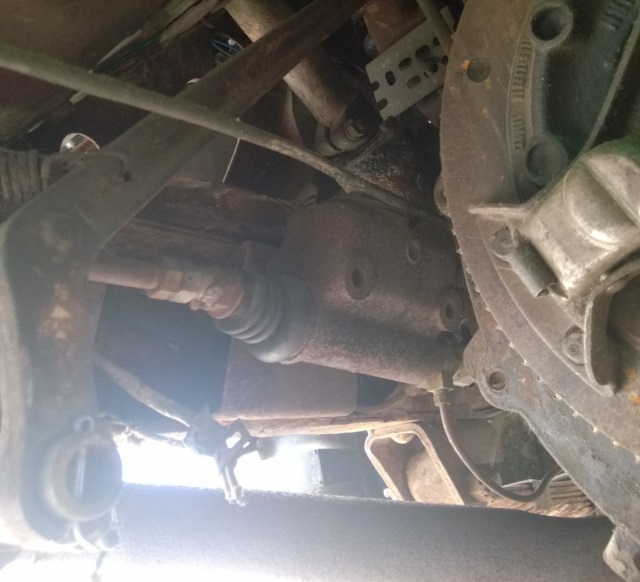 The teeth on the flywheel were half or more worn off: 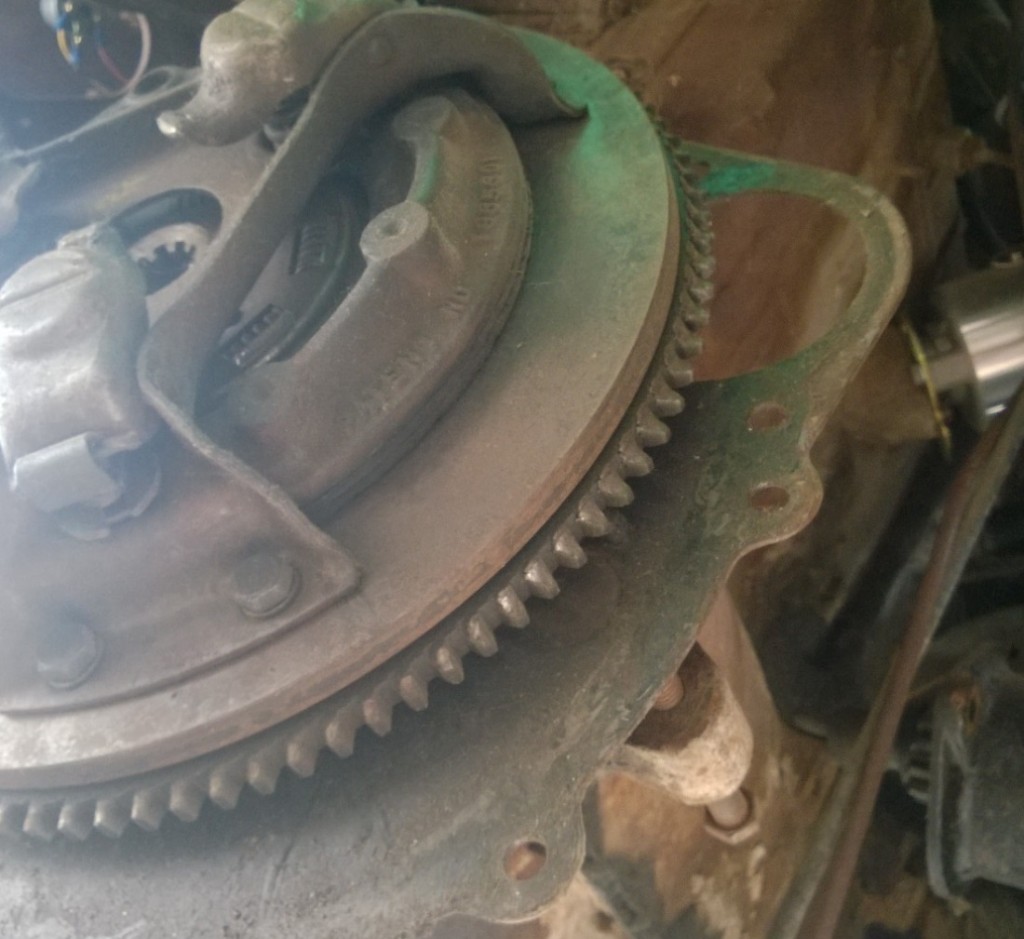 Bubba had welded the ring gear to the flywheel.......I also found the ring was broken, which is why he welded it back on. Normally it's a tight fit ring you get on the flywheel by heating the ring in the oven and freezing the wheel first, they hurrying it on before they get back to normal temperature. 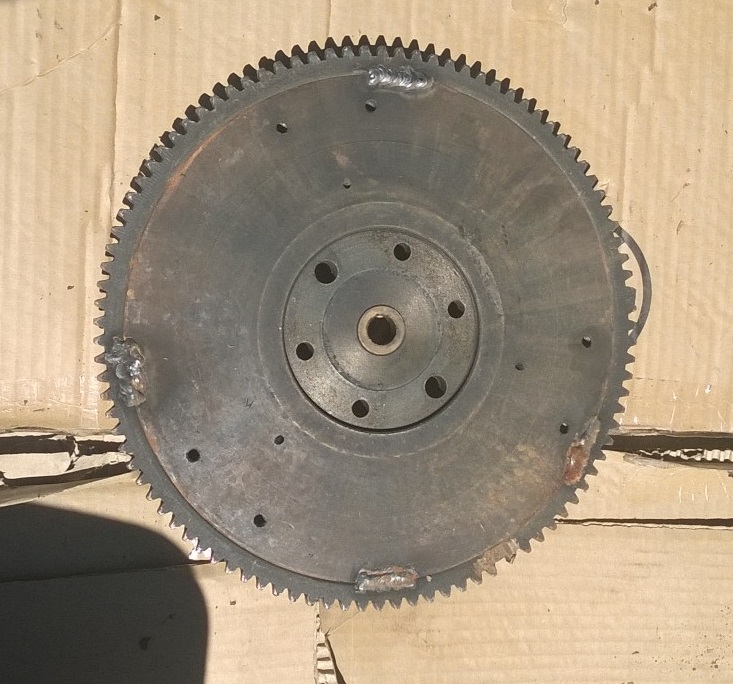 Left rear shock mount was busted, and no shock. 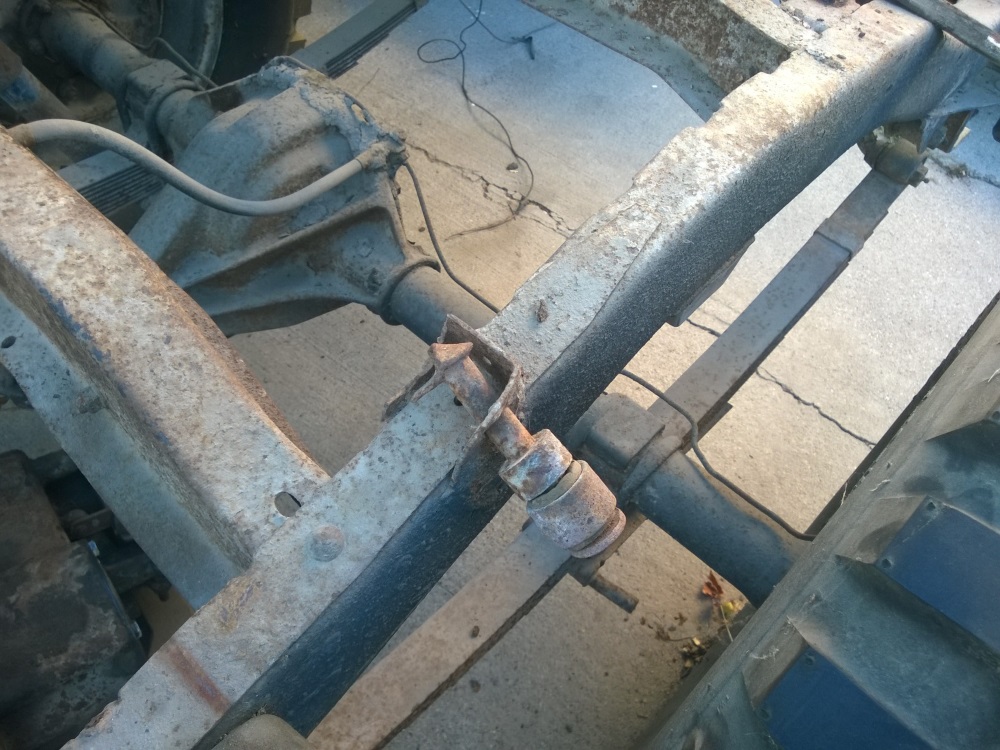 The clutch pedal-to-cable rotating assembly isn't stock. Bubba made it work with lots of spacer nuts and welding the outer bearing point into a patch panel on the frame. 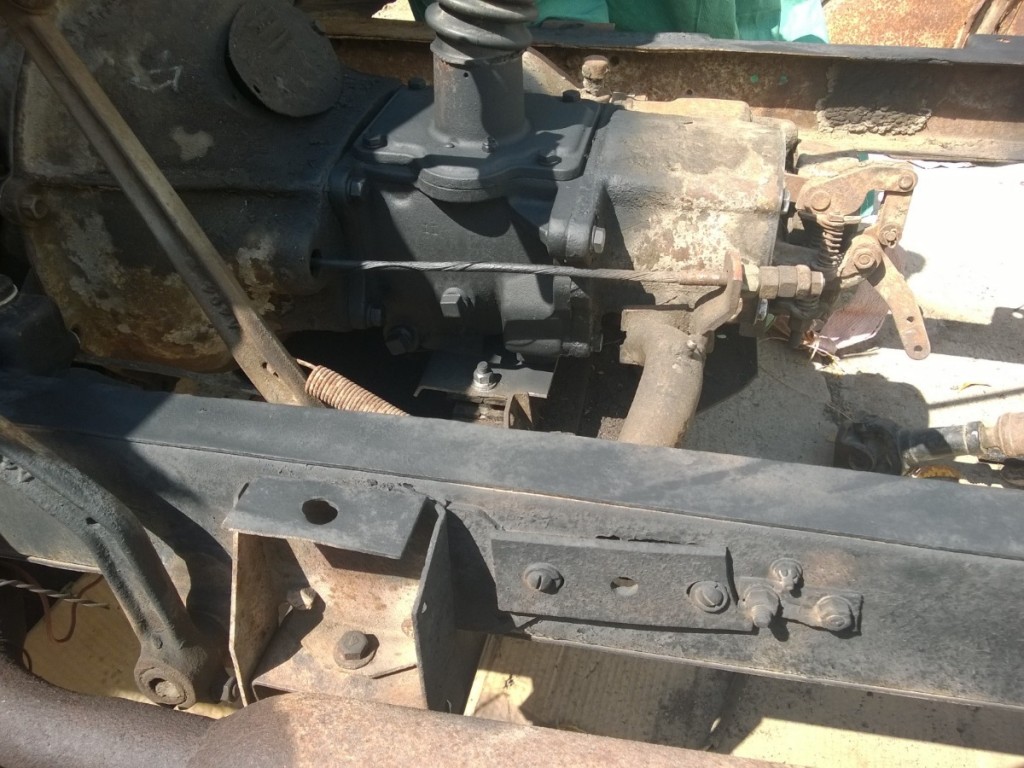 We got all of those issues fixed and got the call from Novak! We picked it up and got it all mounted back to the engine. I probably should have replaced the clutch at this point, but wifey wasn't too happy with the Novak bill already. 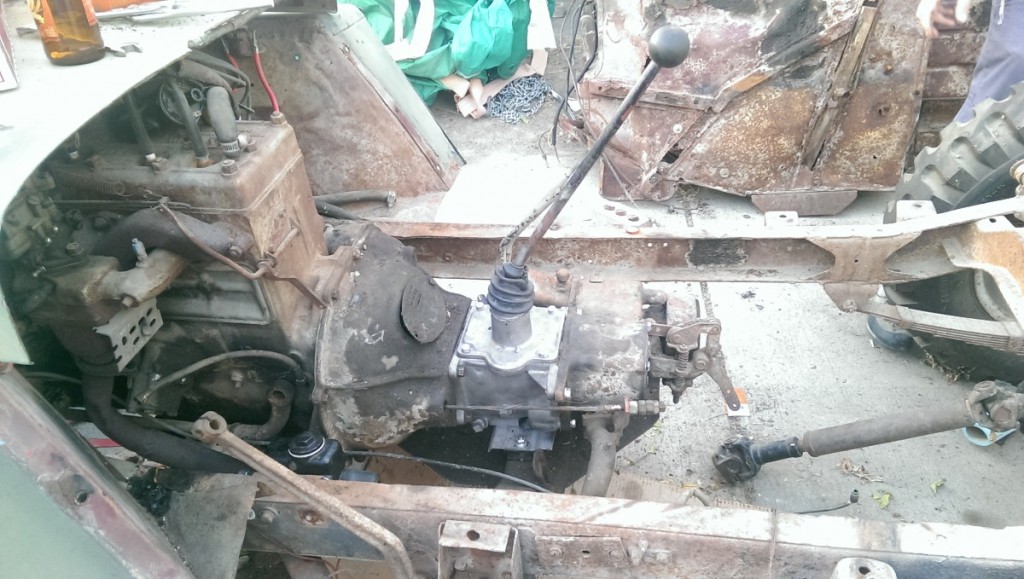 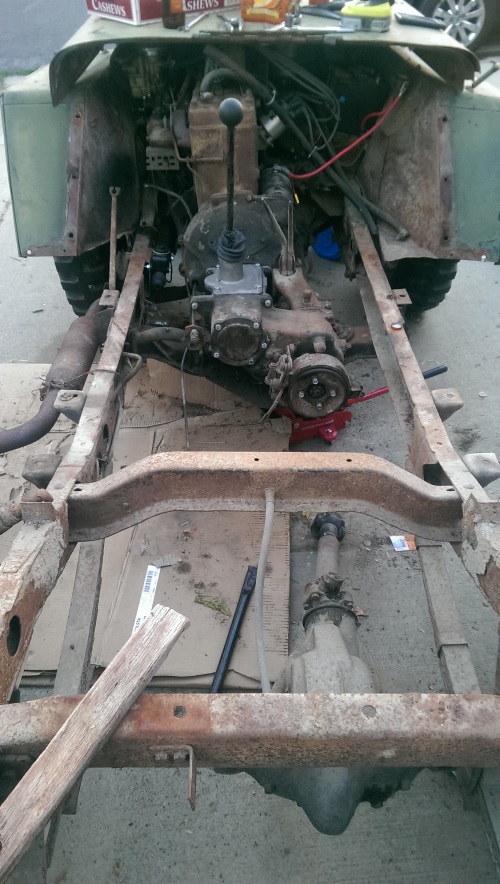 While I was working on the tub, I sprayed the frame and a a lot of the axle, etc. with Rust-Oleum Rust Reformer. 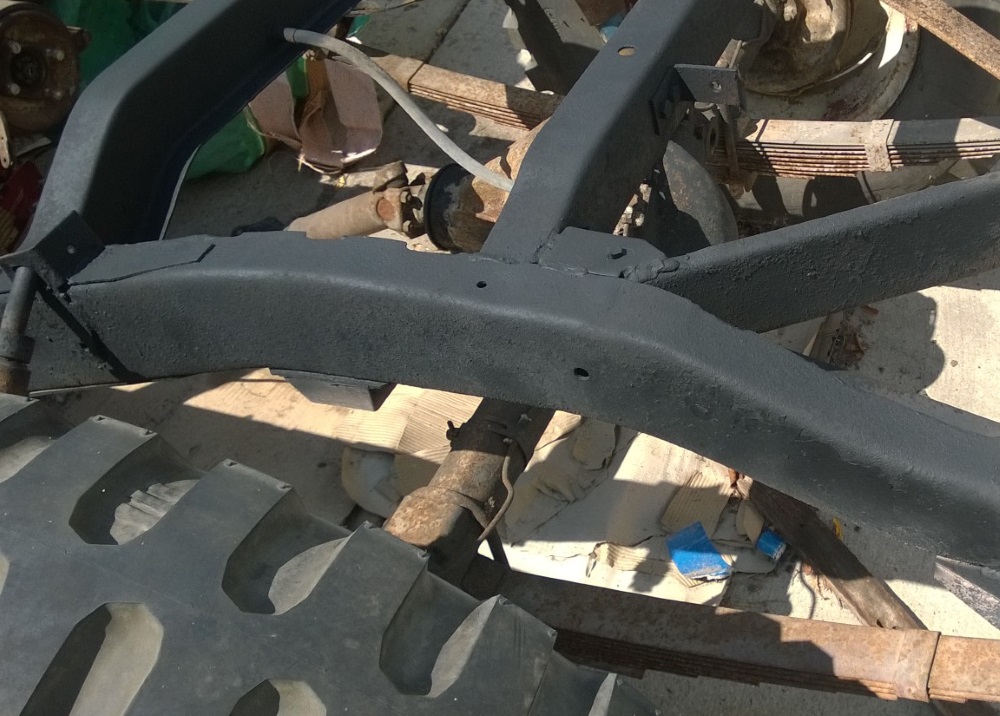 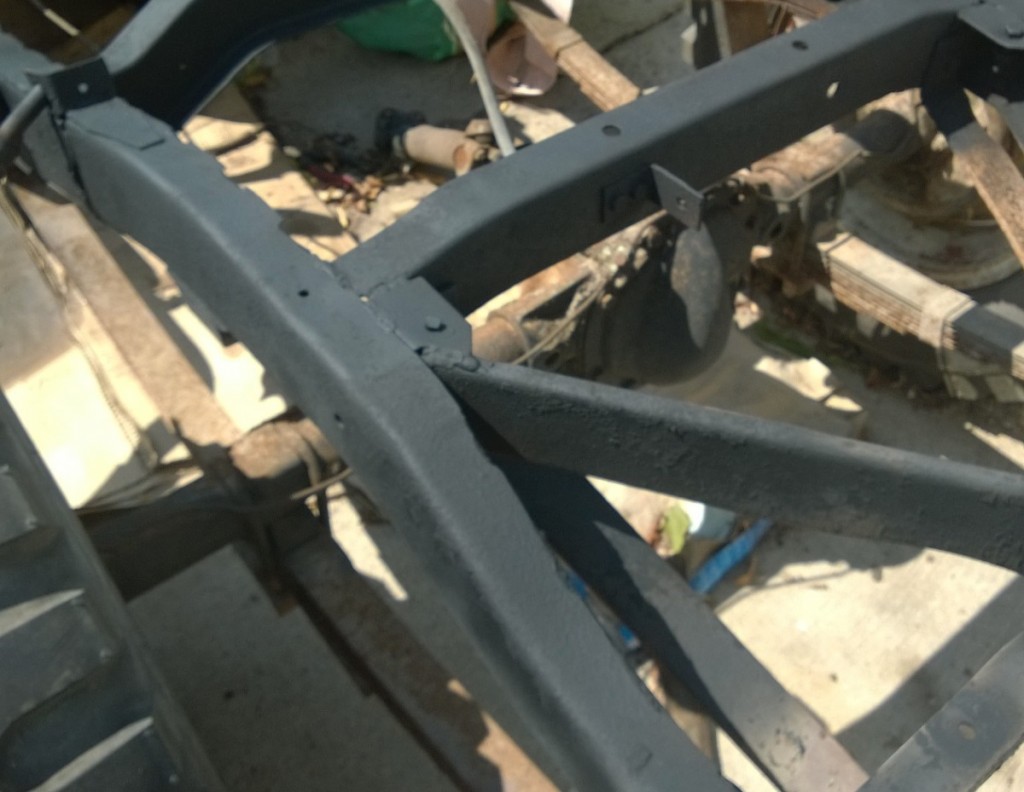 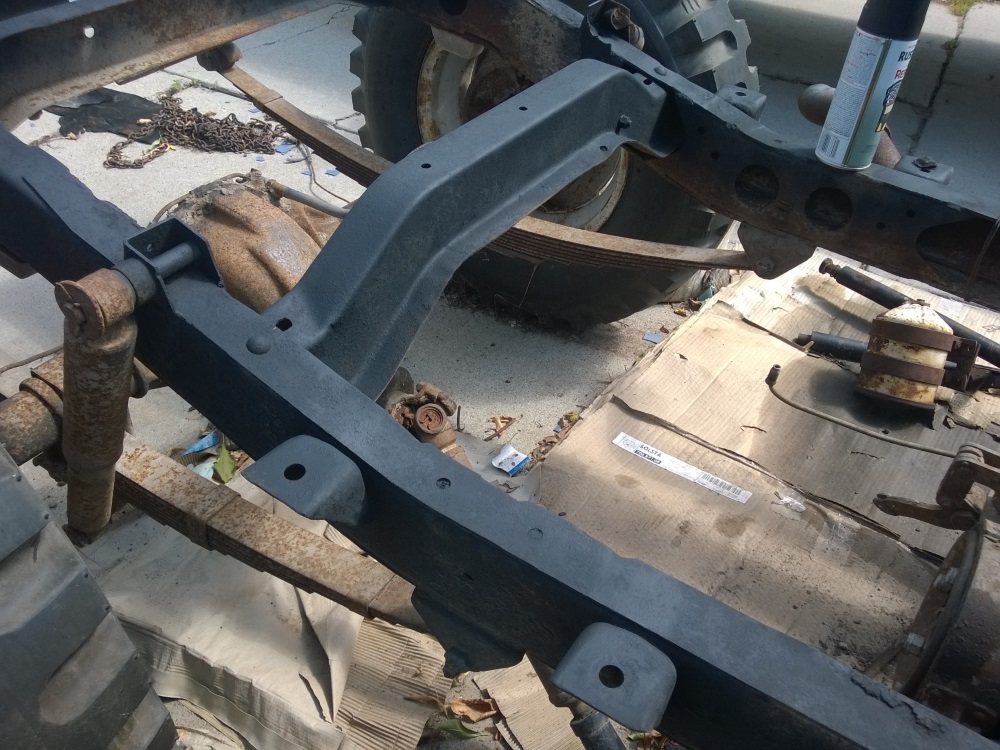 Got the master cylinder mounted right, bled the brakes and got the tub restored and mounted. 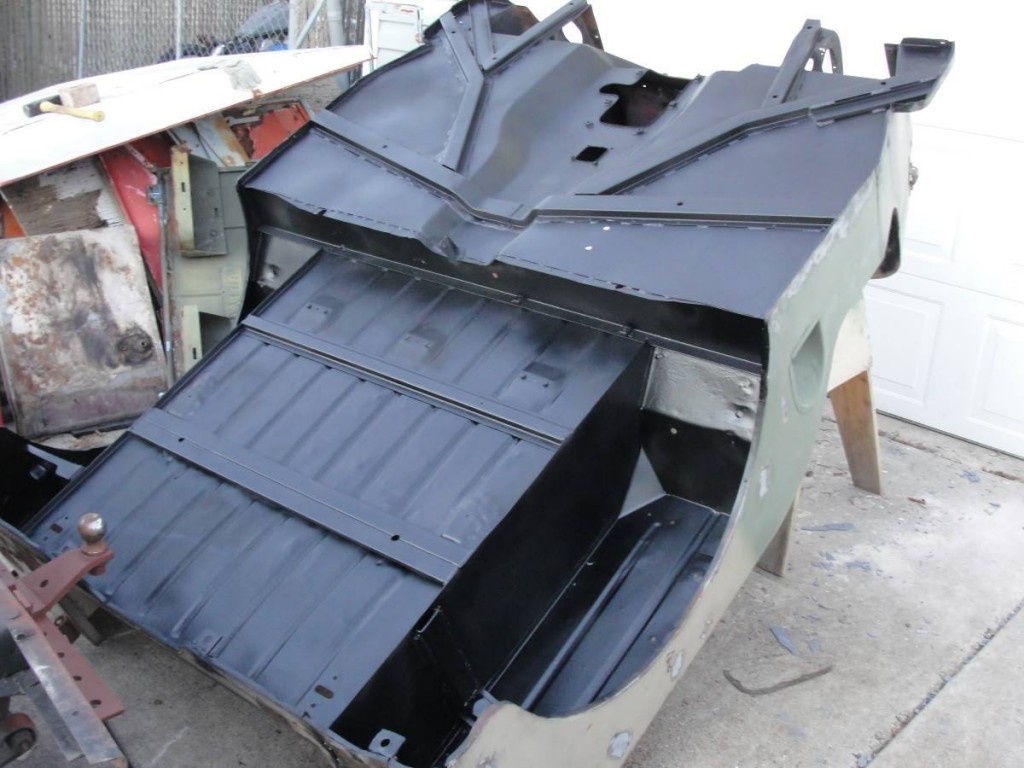 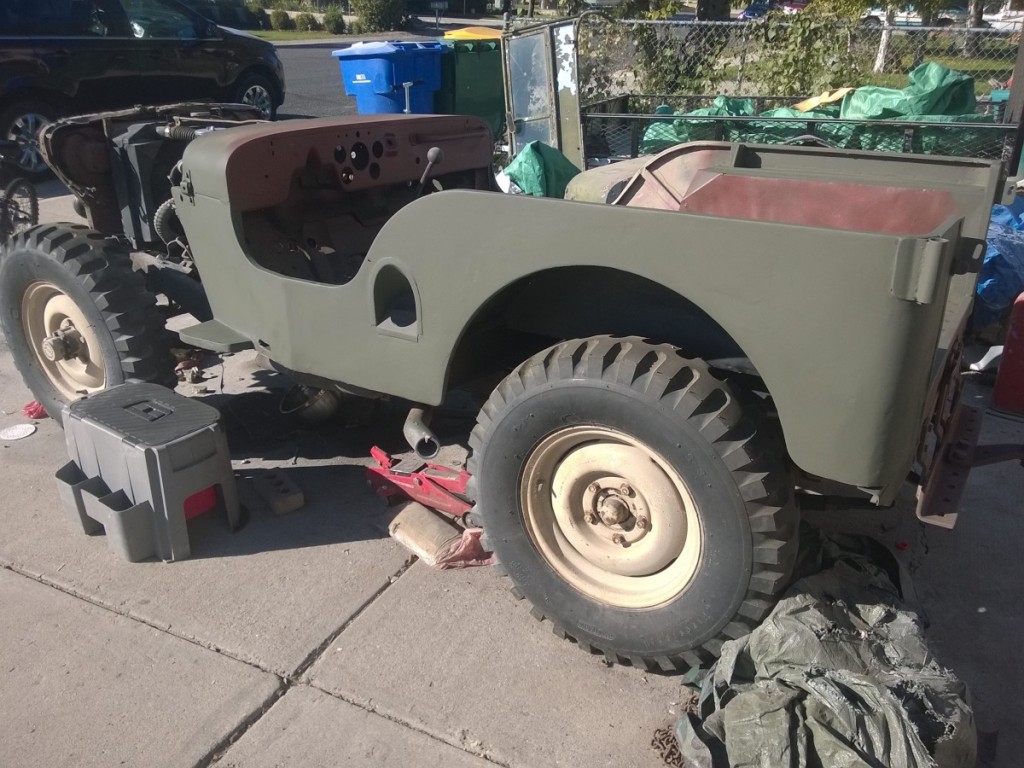 That was the first big day! Now everything else was essentially 'small stuff'. AKA things I could do on my own without needing help lifting or welding.

Next bubba fix was this exhaust manifold! I replaced it with a new manifold. 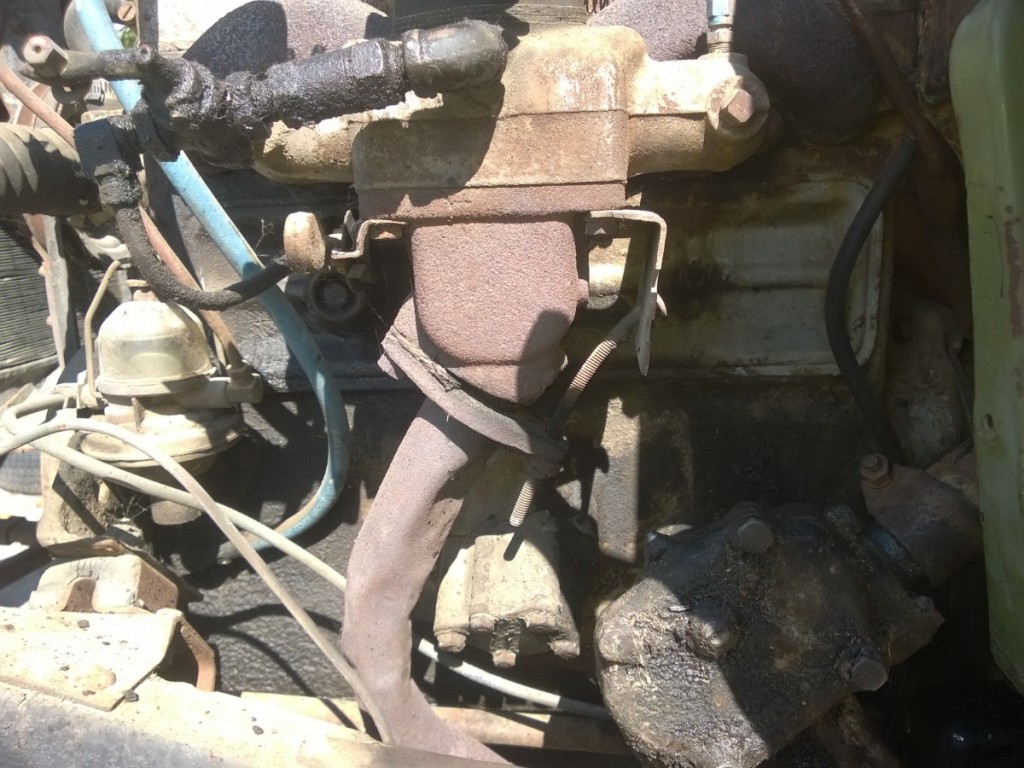 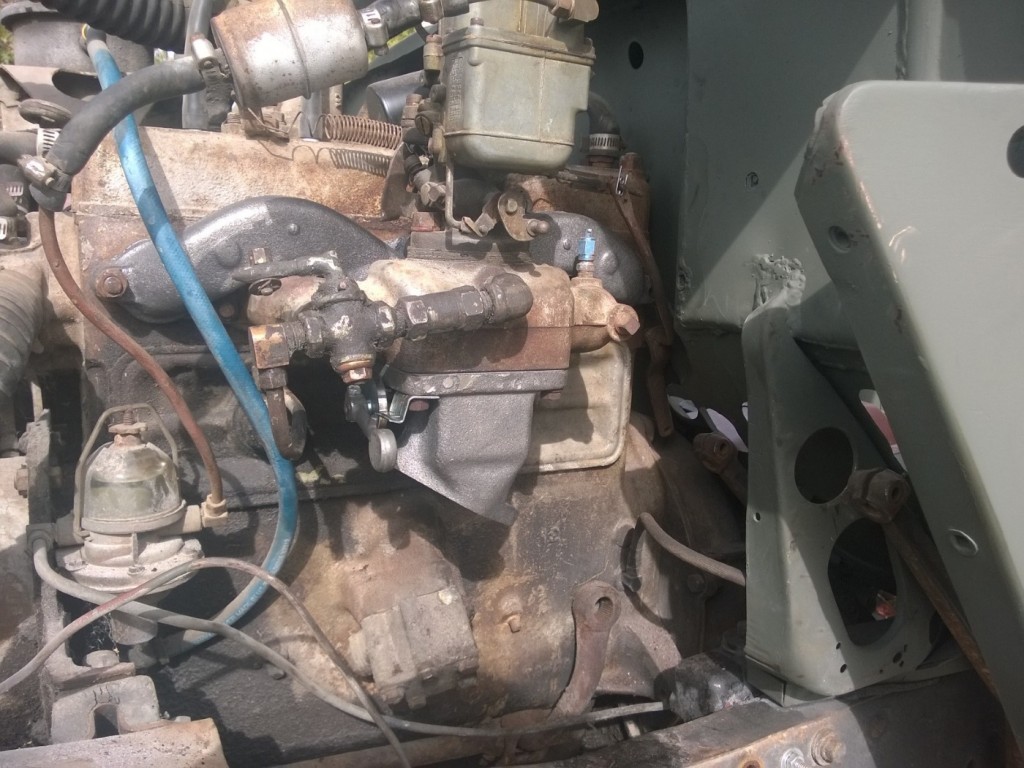 We got the gauges necessary to run installed, got the hood back on, steering column in, windshield on, painted it a nice Dark Drab Green

and fired it up. It would idle fine, but would not run moving for more than 3-4 minutes. I suspected a fuel problems. I wound up replacing the fuel pump, lines once or twice, and swore at it as much as I could. none of that helped. Eventually I got to the point of removing the fuel system a 7th time in 3 weeks time. I was blasting all the lines clear when I went ahead and hit the gas tank output fitting with the compressor. It hissed a tiny bit but it didn't sit right with me. I soaked the hole with carb cleaner a while then hit it again and *POF*, some sort of gunk blew out the fitting into the tank. I put a couple cups of gas in there, sloshed it around and drained it. I found this debris in the fuel: 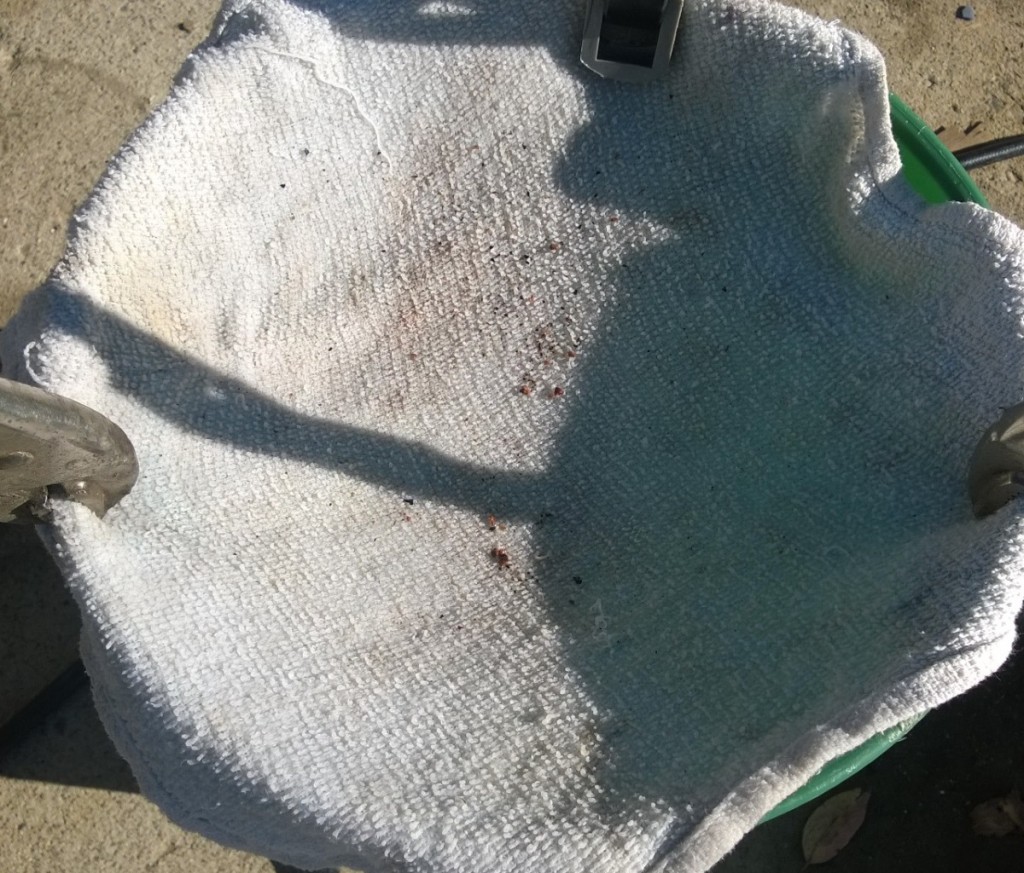 I repeated until no flakes or chunks of brown schmeg came out... put the fuel system all back together with new hoses and filter and VOILA! It runs like a champ! I got the fender back on and it runs great.

This is the goal I had set for this fall.. I wanted to get it running by snowfall and succeeded! There's only a few little things like wiring the light switch and brake lights, adding the fuel gauge back in, wipers and putting the tailgate back on... But it's finally a running jeep again after 17 months! 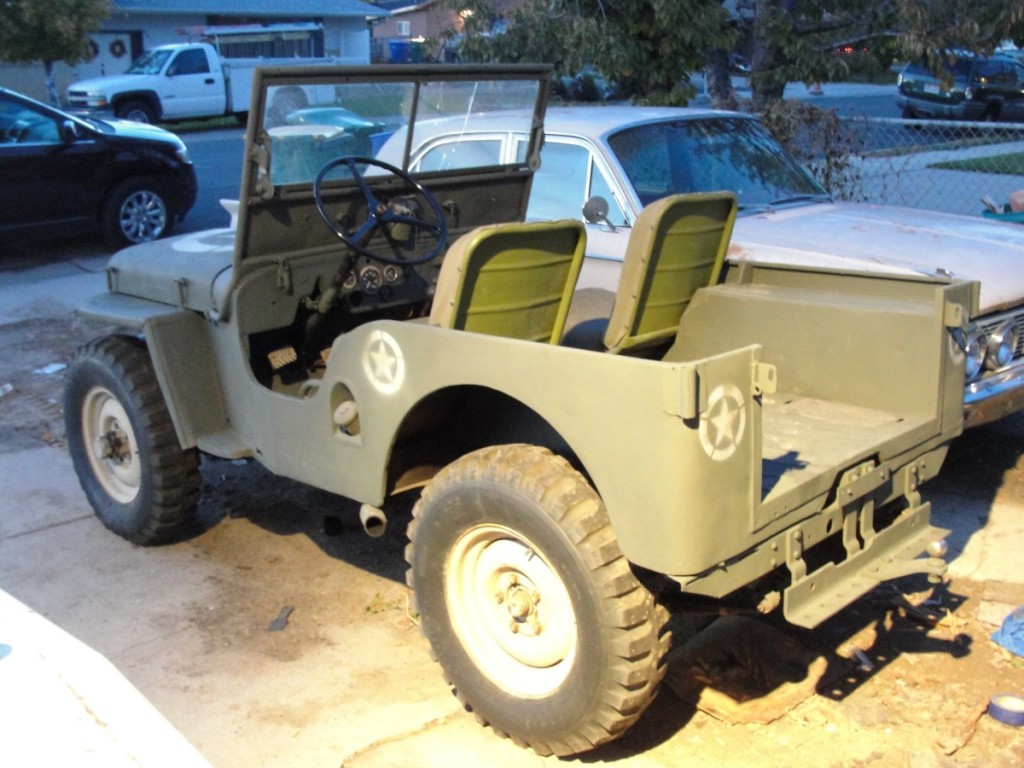